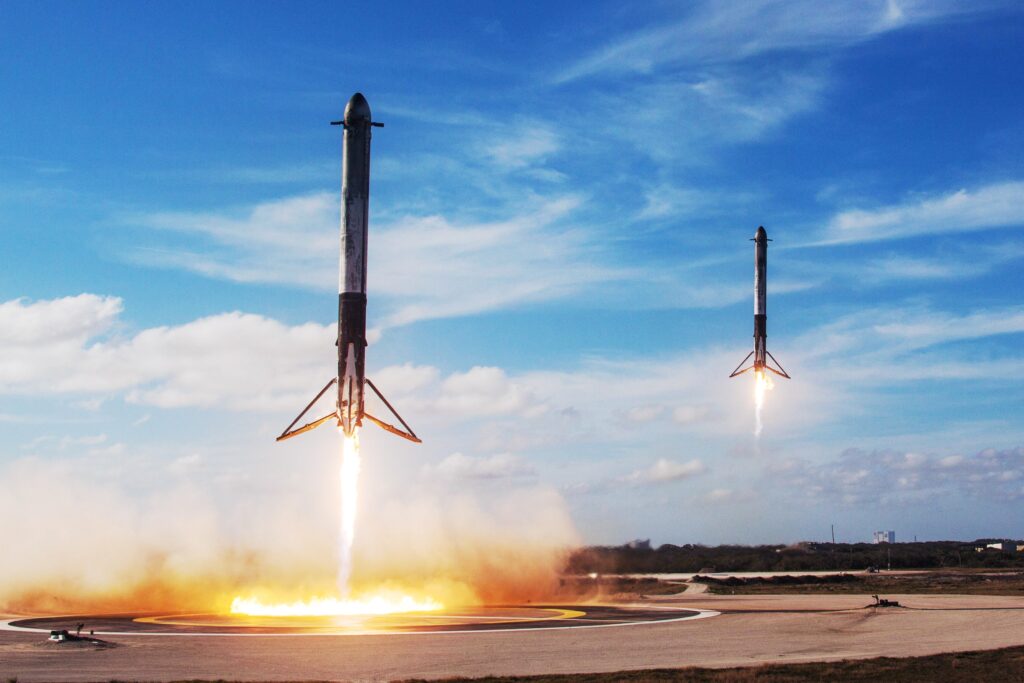 Humans are curious creatures and we’ve always pushed the boundaries of exploration and technology. That’s why we’ve always looked to the heavens, to expand our knowledge of the unknown and figure out what our place is in the universe. It’s an exciting time to be exploring space right now as new technologies let us peer deeper into the universe than ever before, to discover strange world’s orbiting distant stars and to try and find dark energy and matter. Space is more accessible than ever with the arrival of space tourism and companies like SpaceX and Virgin pushing the limits of commercial exploration. It’s not just about what’s up there, many of our indispensable technologies have come from our quest to explore beyond our planet. Things like GPS, monitoring our climate, artificial limbs, scratch resistant lenses, baby formula and more.

Join us this month as we connect with some of the astronauts, scientists and engineers who take us further into the unknown every year! Julia is an astrobiologist and science communicator at the University of California, Berkeley SETI Research Center and with Blue Marble Space. SETI stands for Search for Extra Terrestrial Intelligence. The center conducts experiments searching for electromagnetic signatures of intelligent extraterrestrial civilizations. Blue Marble Space is an international community engaged in building a sustainable future and nurturing scientific interest with the public. Her research involves detecting life in the universe through biosignatures and techno signatures, and the ethics of sending powerful, intentional messages into space. Her current project, called the Moonbounce project, measures Earth’s techno signature by observing terrestrial radio waves ‘bounced’ off of the moon.

Debarati is a graduate student at McGill University in Canada. She is a member of NASA’s Mars Science Laboratory team and studies rock chemistry and habitability of the planet Mars using the Curiosity rover. She uses the laser instrument on the rover to measure the element boron in Gale Crater on Mars. Boron is a very soluble element and can tell us about past water activity on Mars. Debarati also uses samples from areas on Earth that resemble certain areas on Mars as an analog to understand Martian processes. She recently visited Death Valley to collect boron-rich samples that she will analyze using instruments similar to that on the Curiosity rover.

Dr. Abigail Fraeman is the deputy project scientist for the Curiosity Mars rover and research scientist at NASA’s Jet Propulsion Laboratory in Pasadena, California. Her research focuses on understanding the origin and evolution rocky bodies across our solar system. In addition to Curiosity, Abigail has worked on the Spirit and Opportunity Mars rover and Mars Reconnaissance Orbiter missions, and she is also involved in developing new instruments and mission concepts for to explore our solar system in the future.

Tara Ruttley is an Associate Program Scientist for the International Space Station (ISS) for the National Aeronautics and Space Administration (NASA) at Johnson Space Center in Houston. She believes that by exploring the distinct changes that happen to living and physical systems in the unique microgravity of space can tell us more about who we are on Earth, where we come from, and where we might be headed. She came to work for NASA in 2001 where she began her career as a biomedical engineer for the medical equipment and human research hardware used on the ISS. Her role in the ISS Program Science Office consists of representing and communicating all research on the space station, and supporting the ISS Chief Scientist’s research recommendations.

Janelle Wellons graduated with her B.S. in Aerospace Engineering from the Massachusetts Institute of Technology and now works at the NASA Jet Propulsion Laboratory as an instrument operations engineer. She has won various team and individual awards in her time there, including the JPL Bruce Murray Award for “inspiring students to engage in STEM, quenching their thirst for knowledge, and sparking a curiosity greater than the stars in the sky”.  Her job consists of planning, generating, and validating the commands to operate scientific instruments in-flight, as well as monitoring their health and safety.  She also works to develop instrument ground data systems and concepts to be used in operations. She has worked on missions at Saturn, the Moon, and our own planet Earth. Additionally, she serves as the President of the Black Excellence Strategic Team, one of JPL’s Employee Resource Groups. When she isn’t working, you can find her scuba diving, traveling, playing video games, cosplaying, enjoying the outdoors, and doing outreach for communities traditionally underrepresented in STEM.

Sabrina is an Aerospace Engineer at the National Aeronautics and Space Administration (NASA). She performs orbit design studies and develops trajectories for near-Earth, as well as, interplanetary missions. If being a “Rocket-Scientist” is not enough already, she is also currently pursuing a Ph.D. in Atmospheric Physics. Sabrina has received numerous awards and recognition for her work. She considers herself an “Artsy” engineer. She is passionate about innovation, space exploration and having a positive impact on society.

Sabrina uses art to inspire the next generation of girls to be confident in their abilities and know they are more than capable of breaking down barriers they will encounter as they pursue their dreams. Under her artist name, Nefertiti-Pokahontas, she is creating a collection of paintings and books, called “Girl in Space”. These works of art highlight females pursuing their dreams and fulfilling their destiny as they explore and make contributions to our understanding of the Universe. Ultimately, she hopes young ladies will see themselves in these works of art and be encouraged to pursue careers in STEM and the Arts. Her artwork can be found at www.nefertiti-pokahontas.com.

Ravi joined JPL in 2005 and was part of the team that landed the Curiosity rover on Mars. After 8 years at JPL, Ravi took a break to design products to help lift people out of poverty. Ravi has since returned to JPL where he led operations of the InSight lander on Mars, helped integrate the science instruments for the Psyche mission to visit an asteroid, and now manages the group that designs the hardware to land spacecraft on different planets.

Kevin is an actual Former NASA Rocket Scientist. He’s a mix of Bill Nye the Science Guy and Dwayne ‘The Rock’ Johnson. He educates about science in a fun & easy to understand way, while also showcasing an active & healthy lifestyle, grit & determination, and serves as a role model for others. He breaks the traditional stereotypes of dumb-jock and socially awkward nerd. Kevin is a Space Systems Engineer at The Aerospace Corporation and has worked as a Systems Engineer at NASA’s Jet Propulsion Lab (JPL) in Pasadena, CA in Project Formulation from 2015-2018. Kevin has worked on the Europa Lander Mission Concept as a Flight Systems Engineer and also in the Advanced Design Engineering group working on advanced mission concept studies as a part of TeamX and A-Team. Kevin is also a 2x American Ninja Warrior, Certified Personal Trainer, and an Eagle Scout! Aaron is a Mechanical Engineer at NASA Jet Propulsion Laboratory. He designs, builds, and tests robotic systems to acquire samples of rocks and soil from other planets so that we can study them for science. He has had roles on the Mars Science Laboratory Rover Mission and the InSight Mars Lander. Currently, he is developing the drill bits that will be used on the Mars 2020 Rover. Aaron is Navajo, originally from a small town near the border of the Navajo Nation. He is passionate about spreading the excitement of STEM to students from his home community and across the nation. 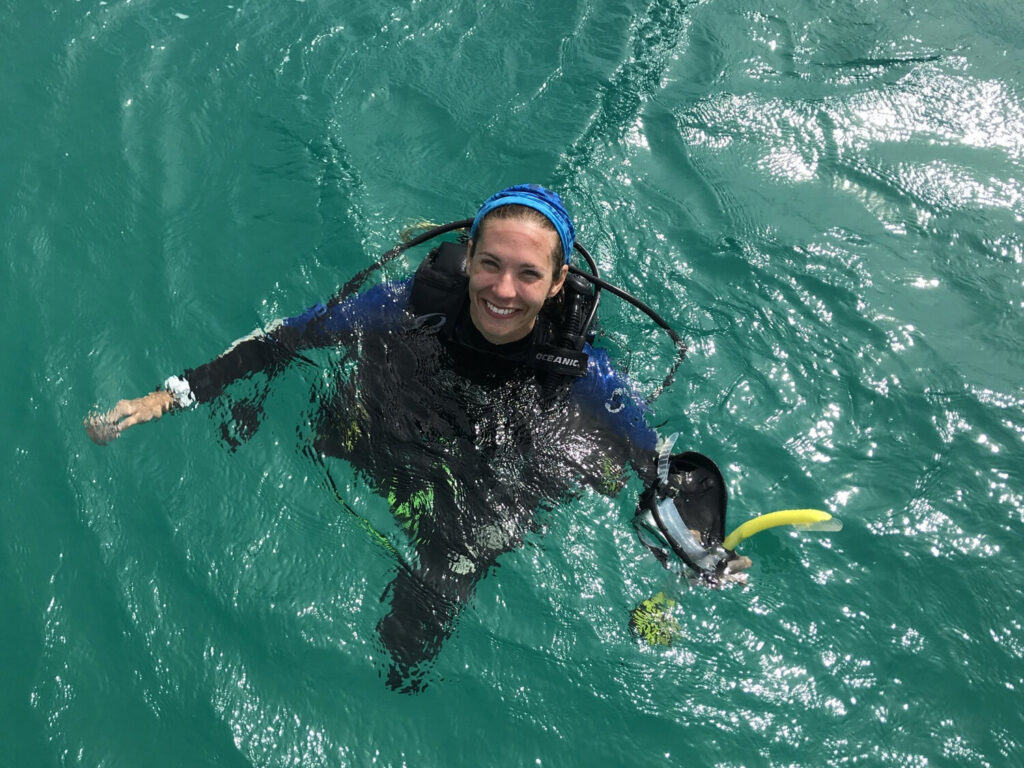 Adele is supporting the exploration spacesuit and lander integration for NASA’s next missions to the moon. Over the last 19 years, her background in physics has empowered her to support multiple domains including human spaceflight, defense, and healthcare. Through this work, she’s been training astronauts for spacewalks on mockups of the International Space Station at Johnson Space Centre in the Neutral Buoyancy Lab (largest indoor pool on the planet). She’s passionate about sharing science and inspiring others to pursue STEM careers. If there is one thing she could share about science is that “Science doesn’t care if you are cool, rich, or have lots of followers. Science is hard and demanding but amazing and powerful. In her free time she hangs out with her husband and dogs while volunteer SCUBA diving to rebuild the coral reefs in the Florida Keys. Alinda is the deputy program manager for the Conjunction Assessment and Risk Analysis (CARA) program at Goddard Space Flight Center. She is responsible for helping manage the team that is responsible for providing collision avoidance operational support to all NASA non-human spaceflight missions. Her team of operators at Goddard, along with a team of orbital safety analysts at Vandenberg Space Force Base in California, coordinate with the NASA missions and inform them of any potential close approaches based on predicted data and other information. This also ensures that NASA maintains an active role in avoiding the proliferation of space debris caused by collisions or breakups and thus play a key role in keeping the space environment safe and continually available for operational use to perform the important scientific research and provide the services we need on Earth that affect our daily activities such as weather information, communications and navigation. Dr. Jennifer Heldmann is a Planetary Scientist working in the Division of Space Sciences and Astrobiology at NASA Ames Research Center. She is interested in studying the Moon and Mars as well as our home planet, Earth. Her Mars research focuses on studies of recent water on the Red Planet through spacecraft data, computer modeling, and fieldwork in Mars-analog environments (which are places on Earth that are similar to Mars) such as the Outback of Australia, the Canadian High Arctic, the Atacama Desert, Spitsbergen, the Mojave Desert, Iceland, and Antarctica, among other locales. She also studies the Moon with a focus on improving our understanding of lunar ice deposits.  Ice on the Moon is important for science research and for planning future human exploration of the Moon. Diana is a Propulsion Development Engineer, originally from Baghdad, Diana is an Iraqi immigrant who has been passionate about engineering since she was 10 years old, watching her grandfather weld metal plates in small machine shop in the backyard of their home in Baghdad. She was heavily involved in NASA’s CubeQuest Challenge in designing a 6U Cubic Satellite with propellant feed system, powered by a monopropellant engine. She became a Brooke Owens Fellow in 2017. In October 2018, Diana founded @TheArabianStargazer, a bilingual Instagram page that promotes STEM to the Arab youth all around the world.